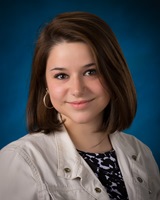 Liz Demers joined Eaton & Berube in June 2012 as an intern through the InVEST program, before transitioning into the role of personal lines customer service representative one year later. She obtained her Property & Casualty Producer License in 2013, and was promoted to a personal lines account manager in 2016. Liz has also obtained the Accredited Customer Service Representative designation. In January 2017, she was promoted to her current role as a commercial lines assistant account manager.

Liz graduated from Pinkerton Academy in Derry, N.H., in June 2012, where she focused her studies on finances. During her four years at Pinkerton, she was active in the school’s career training department, where she learned about InVEST, a school-to-work insurance program that teams with high school and college educators to provide an insurance curriculum for students.

Prior to joining our team, Liz worked as an intern at SyAM Software in Nashua, N.H., as well as held jobs as a daycare staff member and a referee. Outside of the office, she enjoys crocheting and spending time with her family, including her dog, Whiskey.